Sprint is the fourth-largest wireless carrier in the U.S. While its network isn't as extensive as Verizon, AT&T, or T-Mobile, you may still consider switching to Sprint for other reasons.

Maybe the signal strength is great in your area or you're getting a good deal on a used smartphone on the Sprint network.

Regardless of your reason for checking out Sprint coverage, we've got the lowdown for you.

In addition to the coverage map below, I'll also tell you how to save over half on cell phone plans for the Sprint 4G LTE network.

Does Sprint provide service in your location? Use the map to see whether you'll get the coverage you need not only where you live, but in places to which you travel.

Sprint's strong point is its solid 4G LTE network in large metropolitan areas. The network excels in highly populated locales, with less reliable wireless coverage throughout the Great Plains and western states. There are some areas with weak or no coverage: 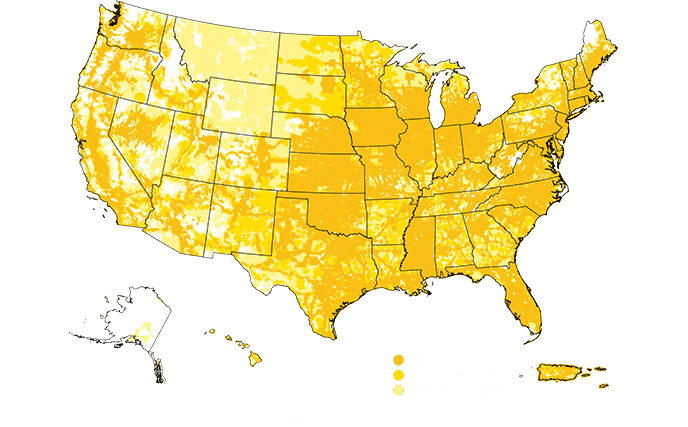 Of course, coverage isn't the only factor in choosing a mobile network. You also want to know that you're going to get the 4G speed you're used to. According to OpenSignal, Sprint users experience 4G reception 85.7% of the time. You can see how this compares to the other major networks in our coverage guide.

Once you've decided to switch to the Sprint network, you'll probably want to know how to find the cheapest Sprint phone plans. It's a great time to be a wireless customer because you no longer have to pay Sprint prices for Sprint service.

Thanks to the growth of the MVNO industry, you can now choose your network and then shop around for the best features and prices offered by alternative carriers called MVNOs.

MVNOs - or Mobile Virtual Network Operators - are mobile service providers that lease space on the big four networks and sell it to you at discounted rates. Yes, it's really that simple to find a cheap cell phone plan.

There are several reasons to go with a smaller wireless carrier:

Don't forget to check out how Sprint compares to Verizon, AT&T, and T-Mobile as well:

Is T-Mobile better than Sprint?

Sprint has now merged with T-Mobile and Sprint customers will gradually be migrated over to the T-Mobile network.

How good is Sprint's coverage?

Sprint comes in fourth behind Verizon, AT&T, and T-Mobile for their coverage.

Is Sprint 5G available in my area?

As Sprint has now merged with T-Mobile the Sprint network will gradually be phased out. You can check T-Mobile coverage in your area.

Sprint MVNOs give you all of the same features you're accustomed to on Sprint phone plans without the high cost.

Want a better device to use on your new phone plan? If you can stand not having the absolutely latest model of phone, why not check out the fantastic deals on a refurbished phone?