Getting ready to switch wireless carriers?

Don't do anything until you check out the following information on T-Mobile coverage and cheap cell phone plans on this network.

One of the first things you need to know before deciding on a mobile network is whether you'll get solid service in your location, as well as the places to which you may travel routinely.

T-Mobile has superior urban coverage and is also making improvements to its rural network. As the map below shows, there are some areas with weak or no coverage: 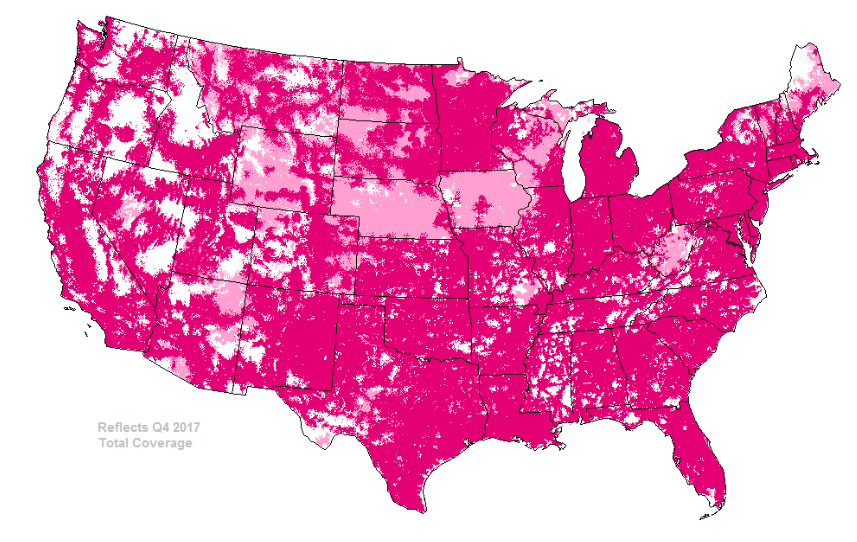 If you've checked out our guide to network coverage, you can see that T-Mobile holds its own against its competitors with an extensive nationwide 4G LTE network.

A report from OpenSignal, which crowdsources data on wireless coverage and reliability, showed that T-Mobile users get reception 93.1% of the time, just ahead of Verizon with 92.7%. The same survey also credited T-Mobile with the fastest average download speeds with 19.42 Mbps versus 17.77 Mbps for Verizon.

So, you're probably under the impression that in order to get service on the fastest wireless network in the nation you've got to pay T-Mobile prices, right? Nothing could be further from the truth.

There's a simple way to save up to 50% on your cell phone bill - sign up with a Mobile Virtual Network Operator. MVNOs are simply smaller carriers who lease use of the big four carriers' towers and sell it to you for a cheaper rate. They can do this because they don't have huge marketing and infrastructure costs like the major carriers have.

Get the same reliable network without the high cost of the big guys. Even better, it's easy.

There are multiple reasons to switch to the T-Mobile network by using a MVNO:

We've got a guide to the best T-Mobile MVNOs, but in the meantime here are a few examples of your options:

Not set on T-Mobile? We've compared all of the other major networks too:

Does T-Mobile use Verizon towers?

No, they do not use the same towers. Verizon uses the CDMA network and T-Mobile uses GSM.

How good is T-Mobile coverage in my area?

Use our ZIP code checker at the top of this page to see if T-Mobile has good coverage in your area.

Is T-Mobile coverage as good as Verizon?

T-Mobile comes in third behind Verizon and AT&T for nationwide 4G LTE coverage. But they come first for 5G network coverage.

T-Mobile MVNOs will not only save you money on your cell phone plan, they'll also help you save on your monthly smartphone bill by allowing you to bring your own device. Keeping your current phone is the most cost-effective solution, of course.

If you do want to upgrade to a newer model, there's no reason to drop $900 or more on the just-released flagship that's really not that different from the previous model. You can save a bundle of money by choosing a refurbished phone.